Got a Harasser Kicked Off the Bus

I’ve had some pretty horrible experiences even in my (relatively) nice neighborhood. This one isn’t too bad, but it ended especially well. Once I was wearing a strapless dress on the bus. The guy behind me was obviously drooling over me and he kept saying, “boy is it ever HOT in here, WOW!” while blowing on the back of my neck. After the 3rd time (3 times too many) I turned around, smacked him across the face and told him to keep his distance. The bus driver noticed the commotion, and stopped the bus to ask us what was going on. I told him, and he took down the guy’s information, kicked him off the bus, and told me he’d report him. Yay!

The following is from a presentation given at the annual conference of the Association for Women in Psychology entitled, “Gender-based public harassment: Avoidance, objectification, and self esteem” by Tracy Lord.

“Limited research on gender-based public harassment suggest there are multiple individual and societal effects of this harassment: increasing women’s fear of men; decreasing trust between men and women; making women ashamed of their bodies; and contributing to women’s self-objectification. Women who are objectified by men begin to self-objectify. The theories of why public harassment occurs include the male bonding theory, the social-structural theory, the sociocultural theory, and the social control theory.

The current study addressed gaps in our understanding of women’s experience of and reactions to street harassment. Women college students (n=125) from the subject pool responded to questions regarding: their public harassment experiences; the frequency with which they occur; and the feelings women have about these incidents. Participants also completed: Rosenberg Self-Esteem Scale; the Multidimensional Body-Self Relations Questionnaire – Appearance Scales; the Objectified Body Consciousness Scale; and the Mobility Inventory for Agoraphobia. Preliminary analyses indicated that street harassment in mild and moderate forms were common experiences. Women reported a range of reactions to street harassment. The complete data analysis will be reported.”

None of these findings surprise me. I look forward to reading the full report, especially the theories cited for explaining why it happens. 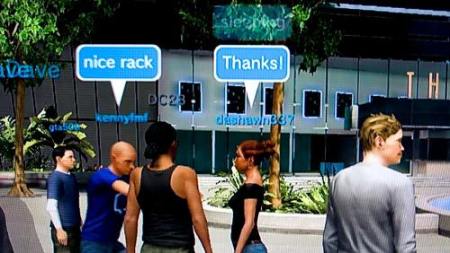 Number five on Gizmodo.com’s “10 Things You Need to Know About PlayStation Home” says “There are lots of dudes. Lots of them.” And it includes this screenshot of a male avatar saying “nice rack” to the only female avatar in the shot, who says, “thanks.”

This post would be an essay if I started analyzing that screen shot alone, so I’ll just say I think it really odd that a random guy is going to comment on a woman’s virtual breasts (that are not real – they are virtual!) and by doing so reduces even an avatar to (fake) body parts.

Also on Gizmodo, I watched two youtube video clips filmed by males playing  the recently released Sony “Home.” The site says, “In it, we see two female avatars being surrounded by male avatars doing little dances. Apparently this is happening all over the service. A lot.”

And indeed, in the video clips there are two or three female avatars surrounded by about five to seven male avatars. Some of the time the women in the first clip (i’m only going to talk about the first one for brevity’s sake) are dancing too and presumably they could leave if they were uncomfortable (I’ve never played this game) so I don’t want to say they are being victimized, especially given that this is a virtual world, but the whole situation is quite odd, as is the commentary from the videotaper. And it’s all the more disturbing/odd if it’s happening a lot.

What I think is especially striking about the dancing is how it is groups of men versus one or two women. Just like a lot of real world street harassment, the online dancing seems to be a form of male bonding or a way to prove one’s masculinity to one’s male peers. In fact, in one of the videos showing the male avatars dancing around the women, the male who was videotaping the incident at first voiced reservations about what he was seeing and passed by, but then he said, “I’m not gay,” and went back and joined the other male avatars in dancing around the female avatars.

If this is a common occurrence, how likely is it that people with female avatars will get tired of being surrounded by males and danced with and so either change into a male avatar or stop playing?

If you’re a gamer, have you ever witnessed this, done this, or been the target of it? If you answered yes to any of those questions, what happened, how did you feel, etc?  What have been the experiences of people who use female avatars?

Another death from street harassment

I just read this – a young woman in Washington, DC, was killed two months ago after turning down the flirtatious advances of a young man passing by her house.

“Stanton was eating a hamburger her mother had made her Thursday night when Jones approached her and demanded she make him a hamburger, according to court documents. Stanton refused. Jones then approached the mother, again demanding a hamburger, said the records. Stanton’s mother also refused, saying “I don’t cook food for people I don’t know”, court records indicated.

Jones became angry, according to a witness, made a telephone call and left the area, according to court documents. A second witness told investigators that Jones returned and opened fire on Stanton’s apartment. The bullets passed through the front door, striking Stanton several times.

She was taken to a local hospital where she was pronounced dead. Her mother was shot in the foot and survived.”

Also from the article:

“Some women say neighborhood men can be overly aggressive.

“You never know. Well if I say no, is he going to do this or do that?…it’s just hard,” said Tia Terrell.

“I’ve had men approach me, and I turn my back, they throw rocks and stuff,” said Renay Smith. “That’s crazy. We don’t want to talk to you, just leave us alone.”

This points out what is so very scary about street harassment – a woman never knows how the man will react. Will he escalate his harassment if she ignores him, if she turns him down, if she calls him out, if she yells at him? It leaves us guessing and unsure how to react.

😦 I can’t believe another young woman is dead over this crap. I think this is the third death connected to street harassment that I’ve heard about in less than a year.

Yesterday I went for a run after work in downtown Washington, DC. As I left my office, I had a feeling that I was going to get street harassed and so as I ran, I thought up things I could say when it happened (despite all my work on street harassment, I have yet to do anything more revolutionary at the time of harassment than ignore or glare at them). And I was right, I got harassed.

As I ran down the dirt path of the mall, a man who was walking in the same direction I was running turned around, saw me, waited until I was next to him, and then went “mm-mm-mm” at me as I ran by. It wasn’t the worst harassment I’ve had by a long shot but it is humiliating to be treated like I’m not a person to respect but one to objectify and infuriating knowing that if I had been a man, I could have done my run in peace.

Instead of saying something though, my immediate thought was about how if this were a few decades ago, he could have been attacked, jailed, or lynched for just looking at me for a second too long because he is black and I am white. The high number of lynchings has particularly been on my mind after recently reading: Freedom’s Daughters: The Unsung Heroines of the Civil Rights movement from 1830 to 1970.

So I didn’t say anything to him because I felt my race privilege – yes we will have a black president but racism isn’t over! – and the shameful history of race/gender/violence in American and I kept on running. (Though given my track record of not ever saying anything, I may have done that had he been a man of any race).

Similarly, sometimes I don’t feel it would be fair to call out a harasser who is clearly of a lower socioeconomic status than myself. I immediately think about my privilege of class (and race if both come into play) and I can’t bring myself to call them out for exerting their gender privilege. Does one privilege trump another? Should I just call out all men on their behavior?

What are your thoughts?

(Note: I don’t think one race harasses women more than another. In particular, given how often black men have been falsely portrayed as preying on white women to justify murdering, assaulting, and discriminating against them by white people, I don’t want to perpetuate that in any way… The most offensive street harassment comments I’ve received were from groups of white young men and the scariest experiences occurred when various white men followed me either on foot (2xs) or in their car (1x). Oh and yesterday I got leered at by an older white man on the metro on my ride home from work/running. He finally looked and turned away when I met his stare and I was determined to say something if he turned around to look at me again but he didn’t.)