Thanks for a successful Anti-Street Harassment Day!

Yesterday was a Field of Dreams, “if you build it they will come” moment for me as the decision I made on the morning of February 20 to make March 20 International Anti-Street Harassment Day turned out to be so successful. I’m inspired by people’s creativity and passion and I appreciate how many people around the world helped make the day a success by spreading the word and planning action.

And actually, a lot of activism is continuing this week. For example, events are taking place tomorrow on campuses in Toronto, Canada, and Delhi, India. Woohoo!

It’s great to see events spread out because after all, we know that one day won’t solve this problem. One day won’t even come close. But it’s still valid that March 20 was a starting point for action and dialogue for many people, and a continuing point for many more.

Let’s keep that momentum going. Here are ideas for what you can do to address street harassment year-round! And guess what, next year will be even bigger! 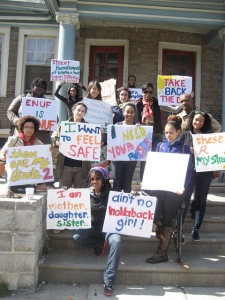 Here’s a quick round up of feedback I’ve received so far about what went down for Anti-Street Harassment Day!

“It was pretty chilly here today, so we didn’t get a fabulous turnout, but we got pictures of us outside City Hall with our [anti-street harassment] signs.”

“We had a great team and a great time doing the 14th St community audit … All went well — very useful info, very successful day — we had some really terrific conversations along the way.”

– Marty Langelan, Author of Back Off!, who participated in the DC Community Safety Audit, organized by Stop Street Harassment (me) and Holla Back DC!, Washington, DC

“We had a great time in Philly. Engaged the community and it was well documented. Some of us decided that we want to do outreach more regularly.” [They did a lot of sidewalk chalk messaging]

“The Relationship Abuse Prevention Program (RAPP) Peer Leaders at Tottenville High, Staten Island, NY, USA, worked to raise awareness about street harassment on March 21…The students will be tabling all week long.  There also will be a project at Franklin Delano Roosevelt High School in Brooklyn this week.”

“First Annual Anti-Street Harassment Day went amazingly! We stenciled in 5 locations around town and handed out over 40 fliers to people asking us what we were doing! Also, got to respond to street harassment as it was happening!”

“Handed out about 100 flyers, 10 good conversations, dozens of “thumbs up” and no detractors!!” [This group of five also held anti-street harassment posters]

Have a successful Anti-Street Harassment Day!

I am SO excited for our big day tomorrow. From people telling their stories to people organizing/attending events, it’s going to be epic.

Here is the information you need for a successful day. 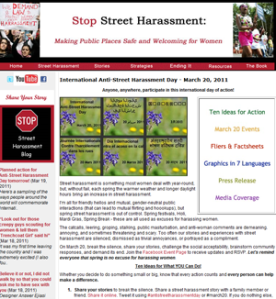 I’m excited to say there’s been a lot of media coverage so far. And already the founder of HollaBack Baltimore, Shawna Potter, had an op-ed published this week and male ally Hugo Schwyzer wrote a great article for Jezebel.

Let’s keep it up and get the message out that spring is no excuse for street harassment.

Thank you for taking action tomorrow – I look forward to hearing what you do.

WASHINGTON, DC – On March 20, thousands of women and men across the United States and throughout the world in cities such as Cairo, Cape Town, Delhi, London, Mexico City, and Toronto will participate in the first International Anti-Street Harassment Day.

Numerous studies show that more than 80 percent of women worldwide face catcalls, groping, stalking, and other forms of gender-based street harassment, especially when they are alone in public. Despite the evidence that street harassment is a global problem and one that reduces women’s mobility and limits their access to resources, it’s often dismissed as a trivial problem, a compliment, or women’s fault.

“Street harassment is a form of gender violence, and it impedes women’s equality with men,” said Holly Kearl, street harassment expert and founder of International Anti-Street Harassment Day. “Since street harassment often increases during the spring months, I saw March 20, the first day of spring, as an ideal day to bring people together to speak out and take action against street harassment.”

The goals of International Anti-Street Harassment Day are to inspire future initiatives focused on combating street harassment locally and globally and to take us one step closer toward ending the social acceptability of the bullying behavior.

Every participant of International Anti-Street Harassment Day will raise awareness about street harassment by sharing their stories online or in person. Hundreds of participants plan to attend community events, hand out materials on their campus or at subway stops, and conduct surveys and audits to better evaluate safety issues for women in their area.

In Egypt, in light of recent attention focused on the problem of men harassing women, Harassmap co-founders Rebecca Chiao and Engy Ghozlan are organizing teams of volunteers to walk through their neighborhoods and talk about street harassment with key individuals, like shop keepers and transportation workers. “Our idea is to create safe zones for women … to help change the street’s environment when it comes to sexual harassment acceptability,” Ghozlan said.

Individuals interested in participating can find 10 ideas for action at www.stopstreetharassment.com, RSVP on Facebook, tweet using the hashtag #antistreetharassmentday, and look for existing events — or add their own — on CrowdMap.

Spring is no excuse for street harassment.

I accept street harassment submissions from anywhere in the world. Share your story!

You can read new street harassment stories on the Web from the past week at:

Street Harassment in the News, on the Blogs:﻿ 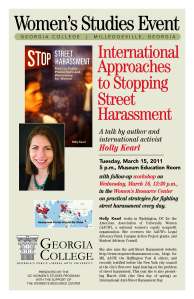 It’s only two weeks away! Participate in the first annual International Anti-Street Harassment Day on March 20!!!

10 Tweets from the Week:

I hereby declare March 20, 2011, the First Day of Spring, to be International Anti-Street Harassment Day.  I invite YOU to participate in a national day of action to challenge street harassment and demand its end. (Facebook RSVP Page) 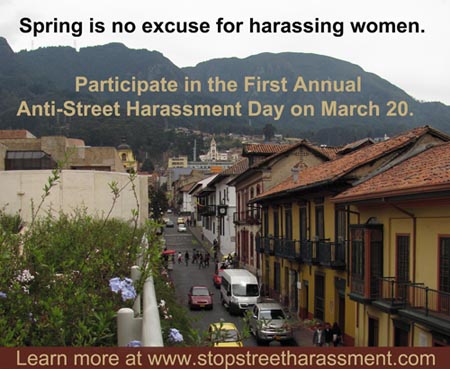 Street harassment occurs year-round, but, without fail, each spring the warmer weather and longer daylight hours bring an increase in street harassment. With spring, we see more men congregating in public places, sitting on porches or door stoops, lingering at bus stops or street corners, and driving with their windows down. Too many of these men think it’s okay to whistle, hoot, hollar, follow, and grab the girls and women they see. During spring, Mardi Gras, Spring Break, festivals and parades are all used as excuses for harassing women.

Too often our stories and experiences with street harassment are silenced, dismissed as trivial annoyances, or portrayed as a compliment. Too few government agencies or elected officials acknowledge this problem or do anything about it.

Ten Ideas for What YOU Can Do!

You have one month to get ready for International Anti-Street Harassment Day. Whether you decide to do something small or big, know that every action counts and every person can help make a difference.

Add your name or organization’s name to the comments if you’re participating.

Please contact me if you have questions or need help with any of these ideas. Please add your own ideas to the comments section and we will work to make next year’s even better!